Scalability is the key bottleneck for current blockchain technology to hinder it from being adopted by large-scale applications. In view of this, more and more blockchain researchers are working on scalability solutions. One of the main factors resulting in its poor scalability is the limited processing ability for a single node. Besides, every newly generated transaction will be executed repeatedly by every single node on blockchain to validate its legitimacy, which severely impedes the efficiency of blockchain.

zkSNARK, which abbreviates from "zero- knowledge Succinct Non-interactive ARgument of Knowledge", is one kind of zero knowledge proof cryptographic primitives. It is a method that one party can prove to another party that he knows the secret knowledge without revealing it. As claimed by its name, three things it solves are:

For example, get the solution of the equation $x^3+x+5=35$. Suppose Alice knows the solution is $x=3$, but she doesn't want to reveal it to Bob while proving to him that she does know it. 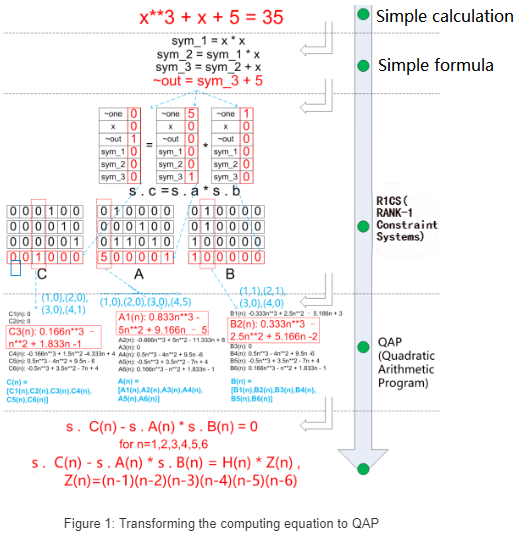 \ Referring to Vitalik's blog[1], it can be solved as follows:

Each logic gate is corresponding to a gadget, in which defines the constraints and the method of generating witness. And we can also customize complex logic gate, such as $mod$, $compare$, $etc$, which can consist of multiple constraints.

The length of each vector is equal to the numbers of all variables in this system, in which include the variable ~one put at the first index position representing 1, and the variable ~out representing the output, and some intermediate variables $sym_1, sym_2, sym_3$ as shown in Figure 1. Generally, these vectors are sparse and only of which are at the logical gate-related variable positions would be assigned the value, and all the left positions would be assigned 0.

After completing a series of transformations above, the computing equation is reduced to obtain the solution of the new equation $s\cdot C(n)-s\cdot A(n) \times s\cdot B(n)=H(n)*Z(n)$.

Alice can use the solution $s$ she already knows to compute polynomials $P(n)$ and $H(n) = P(n)/Z(n)$, and then sends $P(n)$ and $H(n)$ to the verifier Bob. When Bob succeeds receiving both two of them, he would tell that Alice does know the solution by checking whether $P(n)$ equals to $H(n)*Z(n)$ or not.

$s$ is not leaked by this means, but since the degree of polynomial tends to be pretty large, resulting ineffective time cost for transmitting and computing to make it impractical, and another reason is that it cannot be guaranteed $P(n)$ consists of $s\cdot C(n)-s\cdot A(n) \times s\cdot B(n)$.

Therefore, the solution cannot be leaked not only, but also can be verified succinctly. zkSNARK takes the way of sampling verification to simply the verification process, i.e., Bob randomly selects $t$, then sends it to Alice. Alice computes $P(t)$ and $H(t)$, and sends them back to Bob to be verified. The processes are shown below:

By this mean of verification, Bob can assure Alice knows the solution with high probability. Since it has a little probability that there is another solution satisfying $P(t)=H(t)\times Z(t)$, it cannot be 100 percent guaranteed Alice knows the solution. Suppose the degree of $A$, $B$ and $C$ is $d$, then the degree of $p(n)$ is $2d$ and the number of intersections of two inequality polynomials is $2d$ at most, which is very small compared to the number of elements $n$ in the finite field, and the probability is only $2d/n$ if $t$ randomly selected by Alice can make $P(x)$ be validated.

Since $t$ is revealed to Alice, she can also construct P'(t), H'(t) such that H'(t) = P'(t)/Z(t) holds. Then the sampling point $t$ should be hidden from the prover Alice while making she knows it. zkSNARK can do this by homomorphic hiding.

"Homomorphic Hiding" is a property of the mapping $E$ from input $x$ to output $X$:

Firstly, we define $\alpha$ is the pair of $(a,b)$ satisfying $b=\alpha * a$, where $*$ is the multiplication operation on Elliptic Curves, meeting two properties:

We utilize the properties of $\alpha$ to construct a process called KCA (Knowledge of Coefficient Test and Assumption):

Extending to the conditions of multiple KCA:

In the KCA verification described above, it involves multiplication in order to verify $E(\alpha A(t)) = \alpha E(A(t))$, while $\alpha$ is deprecated when constructing the trusted parameters. So bilinear map is acquired to make the homomorphic hiding for multiplication.

The homomorphic hiding described above is one-to-one, i.e., mapping an input to an output. A bilinear map maps two elements from two responding fields to an element in the third field: $e(X, Y) \rightarrow Z$, and has linearity property on both inputs:

Then, the map of $x\rightarrow X$ is also an additive homomorphic map.

From the above we have derived the homomorphic hiding formula of multiplication:

In the example above, Bob need to send amounts of sequences of $E(A(t))$, $E(B(t))$ and $E(C(t))$ to Alice, where the sequence data is pretty massive, and is time-consuming during the transmitting process, and also is not simply enough. Here is the solution: zkSNARK packs punch of data $E(A(t))$, $E(B(t))$ and $E(C(t))$ that Bob sent to Alice to the so-called Common Reference String (CRS), which is generated by a kind of trusted way, and used in the process of all of transaction verification as the consensus of all nodes. Therefore, the verification way is changed from an interactive "request-response" way to the way of simply submitting a proof.

Figure 2: The VC architect in PlatON


\ The workflow of VC in PlatON is: 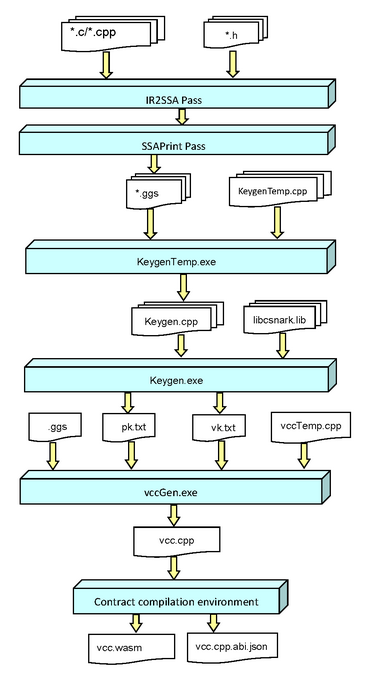 
\ The processes of compling verifiable contract are: 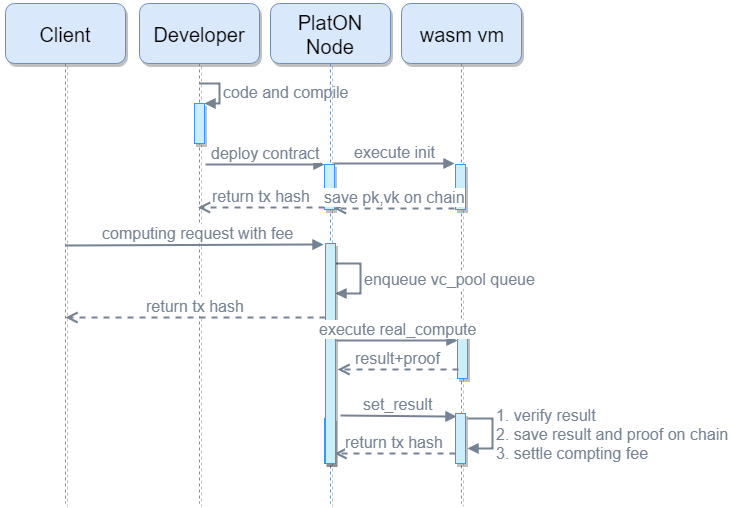 Figure 4: The workflow of verifiable contract


\ Here is the workflow of verifiable contract:

The incentive mechanism of verifiable contract#

Users who have the requirement to outsource their computation need to mortgage the appropriate fees to the contract. Each node in the PlatON network can compete for the computing task. Once the computing node succeeds in finishing the computing task and obtain the result and the corresponding proof, the set_result transaction request would be initiated after that the computing node finished paying the miner fee. As the verifying node receives this request, the set_result would be executed in the meantime, and the proof and result parameters encapsulated in the transaction would be validated their legitimacy. If yes, it could be considered that the computing node obtains the correct result. Meanwhile, the mortgage fee would be transferred to the requester's account as the incentive, and no incentive would be offered if fails.

Analysis to the VC solution#

PlatON will implement more optimized VC algorithm, it would be optimized in the following several ways: