WASM (WebAssembly) is not a language, but a new bytecode format, a brand-new underlying binary grammar, and instruction code compiled by the compiler. Small in size, portable, fast in loading, and compatible with the latest format of the Web, WASM is a new technology to run portable programs safely and effectively. This article analyzes the introduction, advantages, operation mechanism and use of the PlatON WASM contract in detail.

WASM was mainly applied on the Web in the early days. As it continues to develop, it is used as the final format of smart contracts by increasing projects, and runs with the corresponding VM loaded, such as wavm and wagon. Bytecodes are parsed and operate in the core virtual machine module.

Why does PlatON introduce the WASM virtual machine as a supplement to the EVM?

To facilitate the development of blockchain applications, PlatON has launched a dual virtual machine engine that supports the WASM virtual machine and the EVM at the same time. Blockchain applications that originally run on public chains that support EVM, such as Ethereum, can migrate easily and seamlessly if they need to use PlatON due to performance and other reasons.

EVM is essentially a script program, a stack-based virtual machine, which needs to be executed after being translated into instructions by a compiler, which is quite inefficient. At the same time, EVM also has some problems in its architecture and use, such as:

Compared with EVM, WASM, as a kind of intermediate code, runs smart contracts faster, and can be developed in any familiar programming language (C/C++/Rust/Golang). It also has many other features:

At the same time, WASM has been applied by a growing number of projects, including Ethereum that has introduced the EVM. The popularity of WASM has driven its community ecosystem to improve.

In order to adapt the existing WASM applications and developers familiar with WASM to the PlatON ecosystem, PlatON decided after comprehensive consideration to adopt dual virtual machines, that is, to introduce the WASM virtual machine as a supplement to the EVM.

Advantages of PlatON to Introduce WASM#

PlatON factored in some of the disadvantages of the EVM upon its decision to introduce the virtual machine. Right after the EVM was introduced, PlatON began the design and development of the WASM virtual machine, and kept making innovations and improvements in terms of scalability, stability, and operating efficiency. The main functions include:

Based on the application and optimization of WASM, PlatON's smart contract module boasts higher compatibility and performance, as well as better security and flexibility. After successfully integrating WASM and applying dual virtual machines, PlatON tested the performance of the EVM and WASM for comparison under the same environment.

The test results show that the execution efficiency of the WASM virtual machine is much higher than that of the EVM. EVM uses 256-bit machine code that greatly affects the performance of the execution and at the same time increases the memory usage.

The Operating Mechanism of WASM#

The WASM virtual machine is a completely independent sandbox. Fully isolated from the outside, the contract code runs inside the virtual machine, and cannot access the network, file system or other processes. At the same time, to prevent the virtual machine from executing too many computation instructions and falling into an infinite loop, both the gas mechanism and the timeout mechanism are introduced as dual controls. 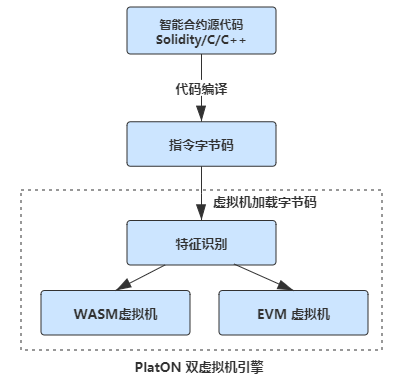 As shown in the figure: Smart contracts written in languages such as solidity/c/c++ are compiled into bytecode by a compiler. At the same time, different types of contracts come with different bytecode features. By recognizing the features, the engine of the dual virtual machines of PlatON can select a specific virtual machine to load the bytecode, parse it, and then execute the corresponding function according to the instruction.

Usage process of the smart contract:

As shown in the figure, you can use C++ to write a smart contract based on WASM, or solidity to write a smart contract that belongs to the EVM, then compile and generate bytecode and other information through the toolset, and then send it to a node on the PlatON network by the transaction through the SDK development toolset. That is a complete process of a contract-related transaction.

PlatON provides a complete WASM contract development kit named PlatON-CDT. Using this kit, you can quickly write smart contracts for the WASM virtual machine. The kit encapsulates various types of data, and is equipped with a simple API interface and detailed interface documentation. At the same time, you can also use the smart contract testing framework PlatON-Truffle for development, compilation, deployment, contract interface testing and other functions, which is convenient for developers to develop and test contracts.

PlatON provides an automated Contract SDK generation tool, which can automatically generate the code for the back-end system to call the contract interface and can shield the parameter encoding and decoding details when calling the contract. In this way, it helps developers quickly integrate contract business into the system, so that they can be more focused on developing the business logic of smart contracts.

This article mainly discusses the background and original intention of PlatON to support the WASM virtual machine and introduces the unique advantages brought by the introduction of WASM. It also briefly explains the basic principles and operating mechanisms of the WASM virtual machine. With this article, the author hopes to provide some useful experience for community users, developers, and blockchain professionals participating in PlatON. From a bust to a boom, WASM will be applied in increasing projects as the underlying level of distributed application development in the future.