A distributed system is composed of multiple nodes, and the nodes need to send messages to communicate with each other. According to the protocol they follow, consensus is reached on a certain task message and is executed consistently. There are many types of errors in this process, but they can basically be divided into two categories.

Considering these two errors, we hope that the system can always maintain two attributes: safety and liveness.

Byzantine Fault Tolerance Protocol (BFT) is a protocol that can guarantee the security and activity of distributed systems even if malicious nodes exist in the system. According to the classic paper of Lampport [2], all BFT protocols have a basic assumption: when the total number of nodes is greater than 3f, the maximum number of malicious nodes is f, and honest nodes can reach a correct result that is consistent.

The BFT consensus protocols currently used in blockchains can be considered as a variant of PBFT, which is in the same vein as PBFT.

The normal PBFT process is shown below (C is the client in Figure 1, the system has four nodes numbered 0 to 3, and node 3 is a Byzantine node):

PBFT is an agreement based on a three-phase voting process. In the prepare and commit phases, each node needs to broadcast its own prepare or commit message, so the communication complexity is $$ O(n^2) $$.

The communication complexity of up to $$O(n^3)$$ undoubtedly has a serious impact on the consensus efficiency of PBFT, which greatly limits the scalability of PBFT.

How to reduce the communication complexity of $$O(n^3)$$ to $$O(n)$$ and improve the efficiency of consensus is the challenge that the blockchain BFT consensus protocol faces. There are several approaches to optimize BFT consensus efficiency:

E. Kokoris-Kogias et al. proposed in their paper the method of using aggregate signatures in the consensus mechanism. The ByzCoin [4] mentioned in the paper replaced the original MAC used by PBFT with a digital signature to reduce the communication delay from $$O(n^2)$$ to $$O(n)$$. The communication complexity is further reduced to $$O(logn)$$. But ByzCoin still has limitations in terms of malicious master node or 33% fault tolerance.

After that, some public chain projects, such as Zilliqa [5], etc., based on this idea, adopted the EC-Schnorr multi-signature algorithm to improve the message passing efficiency in the Prepare and Commit stages of the PBFT process.

SBFT (Scale optimized PBFT) [6] proposed a linear communication mode using a collector. In this mode, the message is no longer sent to each node, but to the collector, and then broadcasted by the collector to all nodes. Further more, the message length can be reduced from linear to constant by using threshold signatures, which reduces the total overhead to $$O(n)$$.

Tendermint integrates round-change (similar to view-change) into the normal process, so round-change is the same as the normal block message commit process. There is no separate view-change process like PBFT, so the communication complexity is reduced to $$ O(n^2) $$.

HotStuff refers to Tendermint and also merges the view-change process with the normal process, that is, there is no longer a separate view-change process. By introducing a two-stage voting lock, and adopting a leader node set BLS aggregation signature, the communication complexity of view-change is reduced to $$ O(n) $$.

Hotstuff changed the two-round synchronous BFT of the traditional BFT to a three-round chain BFT. There is no clear prepare and commit consensus phase. Each block only needs to perform one round of QC. The prepare phase of the latter block is the previous one. The pre-commit phase of the next block is the commit phase of the previous block. Each time the block is generated, it only requires communication complexity of $$O(n)$$. Through the two rounds of communication complexity of $$O(n)$$, the previous $$O(n^2)$$ effect is achieved.

Protocols such as PBFT and Tendermint have the characteristics of Instant Finality, and it is almost impossible to fork. In PBFT, every block has to be confirmed before the next block can be produced. Tendermint also proposes a proof-of-lock-change mechanism, which further ensures the instant certainty of the block, that is, in a round stage, nodes vote on a block with pre-commit, in the next round, the node can only vote for the same block with pre-commit, unless it receives a new proposer's unlocking certificate for a certain block message.

This type of BFT consensus protocol is essentially a synchronous system that tightly couples the production and confirmation of blocks. The next block can be produced only after previous block get confirmed. The system has to wait for the longest possible network delay between blocks, and the consensus efficiency is greatly limited.

HotStuff separates the production and confirmation of blocks. The final confirmation of each block requires the latter two blocks to reach QC, which means that the next block can be produced without the previous block being fully confirmed. This method is actually a semi-synchronous system. The production of each block still needs to wait for the previous block to reach QC.

EOS [9] 's BFT-DPoS can be considered as a completely parallel pipelining solution: each block is broadcast immediately after production, and the block producers wait for 0.5 seconds to produce the new block while receiving the confirmation of the old block from other nodes. The production of the new block and the receipt of the old block are performed at the same time, which greatly optimizes the block production efficiency.

Therefore, we proposed the CBFT consensus protocol. Further optimization on top of the above consensus protocol can dramatically reduce the complexity of communication and improve the efficiency of block production.

The normal process of CBFT is similar to Hotstuff, and it is divided into prepare, pre-comit, commit, and decide stages. However, CBFT has also made key improvements: batch blocks can be proposed in a view window continuously, and the production of the next block does not need to wait for the previous block to reach QC; block producer can product the next block in parallel while receiving the vote of the previous block, which greatly improves the block production speed.

CBFT has a self-adaptive view-change mechanism: in a view window, when a node receives enough blocks and votes in favor (more than 2/3 of the nodes vote, that is, QC), it will automatically switch to the next view, no view-change vote required. Otherwise, the node will start the view-change process which can be completed within the communication complexity of $$ O(n^2) $$ by using the Hotstuff-like two-stage lock rules and BLS aggregation signatures.

In normal network environment, CBFT will not trigger a view-change unless extreme network exception, so it will have less view-change overhead than HotStuff.

Next, the related concepts and meanings involved in the CBFT consensus will be given first, the CBFT details will be introduced later.

It is worth noting that the method of BLS aggregation signature has defects. An attack called rogue public key can give the attacker the opportunity to manipulate the output of the aggregate signature after obtaining the public keys of other signers and standard BLS signature information.

Figure 3 CBFT normal process
1. After the proposer successfully enters the new View, it will product multiple blocks in sequence and broadcast messages PrepareBlock <ViewNumber, ProposalIndex, Block> to the validators.

In order to vote more securely, voting must comply with the following rules: 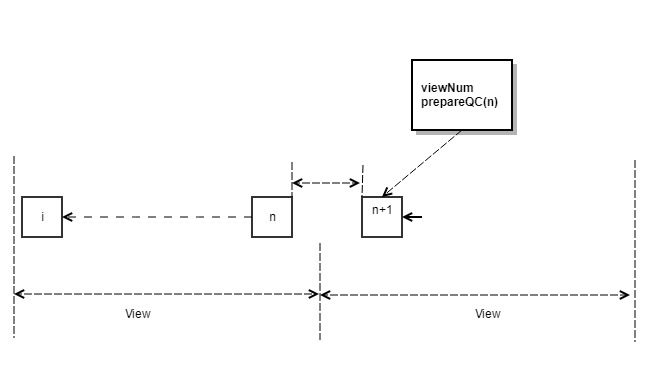 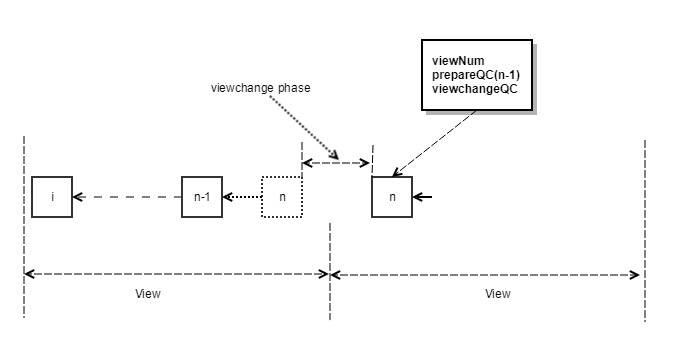 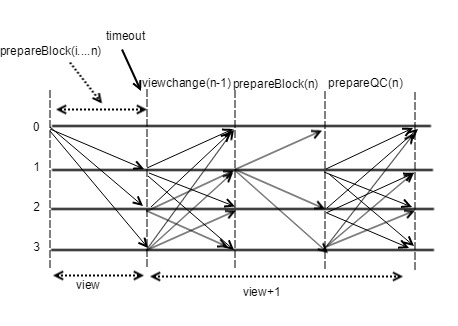 In traditional BFT (PBFT, Tendermint), each block usually needs to go through a clear Pre-Commit and Commit phase before final confirmation:

In contrast, CBFT also has the two phases, Prepare and ViewChange. Each block has only Prepare vote, and has no clear Pre-Commit and Commit phase. So how to achieve block confirmation? The CBFT can be regarded as the pipeline BFT, and each prepareQC is a further confirmation of the previous block.

Therefore, in CBFT, there are only two message types: prepare message and view-change message, and the QC of each message is verified by the aggregate signature method.

Assume each view allows $$n$$ blocks to be generated. The current view $$ V_i $$ time window expires and the view switches to $$ V_ {i+1} $$. At this time, only part of blocks generated by $$ V_i $$ get QC, and some blocks will be reorganized, the reorganization rules are as follows:

In the CBFT consensus, the validator pool is reshuffled every 430 blocks (a.k.a Epoch). The rules are as follows:

The CBFT consensus provides a fault tolerance recovery mechanism, which is the WAL module. This module does not belong to the write-ahead log system in the strict sense, but it draws on the relevant ideas, and in the process of validator consensus, the consensus state of the yet-to-be-finalized block and the current View consensus message are persisted from memory to the local database and local files. After the system crashes or the machine is powered off and restarted, the consensus state is quickly restored through the disk log data.

Here is a brief introduction to the main principles:

Here is an overview of the block synchronization mechanism:

To facilitate the analysis of the safety and activity of CBFT, we define several basic rules of CBFT.

For a chain, the following conditions are met:

Proof: For a normal honest node (voted for block B2 and B), then the node can at least see B0 <-C0 <-B1 <-C1 <-B2, which is the minimum Lock-Block It is Lock-Block (B0). Because ViewNumber (B)> ViewNumber (B2), according to the view-change confirmation rule, the first block of ViewNumber (B) is not less than B1, then Previous_Block (B)> B0

Proof: From the Lock-Block rules above, we know that there are two types of Lock-Block scenarios. In the first case, two QCs are in the same view. From 1), we know that B 'and B cannot receive enough votes at the same time . In the second case, B and B 'belong to different views, and both receive prepareQC (B), prepareQC (B'). Assuming ViewNumber (B ')> ViewNumber (B), then according to conclusion 2), Previous_Block (B')> B, contradicts to the assumption.

4) During the Commit phase, there will be no two Hashes of the same height and different blocks be Committed.

Assume that the maximum network delay between nodes is T and the execution time for a block is S.

2) ViewNumber can reach an agreement and increase

This section lists some specific exception cases, and infers the cases to detect whether there are problems in safety and liveness.

Assume that there are four nodes A, B, C, and D, and each view has a maximum of 2 blocks. The last block is block 7 produced by D, which is in QC state in the four nodes.

When timeout, B, C and D will send view-change request.

As A's View ends, it's B's turn to produce blocks. B will encounter the following two situations.

Now it's C's turn to produce blocks. The following is based on B-1. Assuming that B9 is not reached QC, there may be two cases of HighestQCBlock for each node. The view-change analysis in different cases is as follows:

The HighestQCBlock for each node is as follows:

The view-change actions of each node are as follows:

C will produce different blocks based on the received ViewChange message.

When it is B's turn, B can produce blocks based on A8.

When it is B's turn, B can produce blocks based on A8'.

By rule, B should select A9 as HighestQCBlock from the 4 received ViewChange messages, and produce new blocks based on A9 and broadcast it to other nodes, carrying prepareQC of A9 and viewchangeQC.

If B is a Byzantine node, B may produce blocks based on both A8 and A9 to fork.

After consensus, there are three possible outcomes:

This article discusses the current common BFT-type consensus algorithms, and proposes a CBFT protocol that can be more suitable for the public network environment. It can greatly improve the speed of block confirmation and satisfy the blockchain on the premise of meeting safety and liveness. There is a growing need for consensus speed.